In 1781, Dr. Benjamin Franklin (yes, that Ben Franklin) drafted an enquiry to the Royal Academy of Brussels hoping to embarrass the committee, who he thought had grown pompous and irrelevant, asking them to “… approve, for the serious Enquiry of learned Physicians, Chemists, &c. of this enlightened Age” his modest proposal. Having sufficiently buttered up his audience with high praise and eloquence he turned to his proposal:

“It is universally well known, that in digesting our common Food, there is created or produced in the Bowels of human creatures, a great Quantity of Wind. That the permitting this Air to escape and mix with the atmosphere, is usually offensive to the company, from the fetid Smell that accompanies it. That all well-bred people therefore, to avoid giving such Offence, forcibly restrain the Efforts of Nature to discharge that Wind. That so retain’d contrary to Nature, it not only gives frequently great present Pain, but occasions future Diseases…Were it not for the odiously offensive Smell accompanying such Escapes, polite People would probably be under no more Restraint in discharging such Wind in Company, than they are in spitting, or in blowing their Noses.” His enquiry then was for the great minds of Europe “To discover some Drug wholesome & not disagreable, [sic] to be mix’d with our common Food, or Sauces, that shall render the natural Discharges of Wind from our Bodies, not only inoffensive, but agreable [sic] as Perfumes.”

Dr. Franklin, thus belittled the European scientific community with a fart joke. Yet, he wasn't the only one concerned with the often-cacophonous discharge that accompanies a good meal. Aristophanes and Hippocrates wrote about them, Chaucer, Shakespeare, Ben Johnson and Milton, insulted people with them, Freud tried to explain our embarrassment of them and a host of modern remedies have been invented to keep them from occurring. Thus for centuries we (humans) have been shamed, proud of, and entertained by our flatulence.

According to gastroenterologists there are several reasons humans fart. Most, as Franklin observed, are related to our diet. Some foods just produce more gas. Vegetables, especially cruciferous ones, broccoli, brussel sprouts, cabbage, cauliflower, peas, onions and turnips, according to the Harvard Medical School’s Consumer Health Information site, contain varying degrees of complex sugars or carbohydrates such as raffinose, which for many are difficult to digest. This undigested food then passes from the small intestine into the large intestine, where harmless and normal bacteria break down the food, producing hydrogen, carbon dioxide, sulfur compounds (the stink) and, in about one-third of all people, methane (so only a third of the population can light their farts on fire). Much of this gas is reabsorbed by the body, but what can’t be absorb eventually exits the body through the rectum as flatulence.

Other foods such as fruits containing concentrated amounts of fructose, such as grapes (and raisins), plums (and prunes), melons, bananas, and raw apples, and foods high insoluble fiber and starch like whole grain breads, corn, potatoes, and pastas also contribute to flatulence production. In fact, pumpernickel, means "goblin that breaks wind" in Old German. For those that are lactose (another simple sugar) intolerant any dairy product can create explosive results. 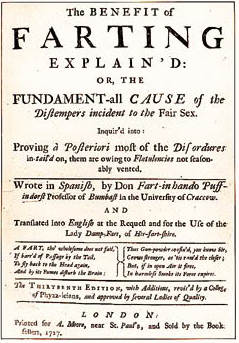 Yet, any schoolchild or fan of Mel Brooks will tell you that the single most potent gas-producing food is the humble bean, especially baked beans. “Beans, Beans the musical fruit,” are made up entirely of simple carbohydrates for which the human body lacks sufficient enzymes in the stomach to break down. Once passed half digested to the intestines, the sludge that was once the beans is consumed by bacteria, and ferments in our bodies producing potent gases that have nowhere to go but down and out. And while some people are able to absorb and tolerate the gas they produce better than others, farting is quite natural, most humans doing it on average 15 – 21 times a day (so, guys, no matter how much she blames the dog your girlfriend/wife farts).

Other dietary habits can also play a role in natural gas production. Outside of eating, swallowing air is the second major causes of flatulence. Although much of this swallowed air is expelled upwards as burps or belches a small amount passes into the intestines and out through the rectum. People swallow air in many different ways, most while ingesting other food. For example, Drinking through a straw can lead to swallowing excessive air which, has to come out some way, often through your butt. Eating too fast, or talking while eating also may induce the diner to take in unnecessary air, thereby increasing the chances of post meal music. So your, mom was right you should always, “close your mouth and chew your food slowly.” Those of you who Chew gum on a regular basis should know that, when you chew gum, you swallow air, and that means more of the above.

Some also claim that lack of exercise and drinking carbonated beverages can also contribute to gaseous excretion. This may explain why so many find Sunday afternoons in front of the football game with the guys so offensive. Think about it, this is potentially the most gaseous occasion ever, corn chips, bean dip, beer (both carbohydrate rich and carbonated), and no one even contemplating exercise. If we could harness the natural gas from these gatherings we wouldn’t have to debate fracking for natural gas production.

So what can we do about such an explosive situation? One gastroenterologist suggests we “increase tolerance for flatus.” In other words, we come to embrace the fart for the normal human function that it is. But come on, really, I consider myself to be somewhat mature, responsible adult, but I admit (a bit reluctantly perhaps) that the sound of someone farting makes me laugh like a giddy school child. There’s got to be a better way.

Scientists believe they have the answer in products like “Beano” an over the counter enzyme that is supposed to hasten digestion of fart producing foods or activated charcoal pills, which are supposed to absorb intestinal gas before its released on an innocent public. Rather than stopping flatulence at the source some have opted for a more novel approach. The inventor of “under-ease anti-flatulence underwear,” (www.under-tec.com) claims his underwear stop foul smelling gas before it escapes. Under-ease are air-tight underwear with a removable filter strategically placed that eliminates odors from the fart as the gas passes through the filter pad.

While the above remedies may work for some, most would agree that the easiest way to control flatulence is dietary modifications. The key here is to keep track of those foods that are associated with the passing of gas. One health website suggests keeping a food log and “over a week or two you can determine your flatulogenic food profile." “Once the offending” foods are identified,” the continue, “they can be avoided to the degree necessary.’ It seems that the Atkins people might be right in one regard; a diet with fewer carbs today, will lead to a quieter tomorrow.

But remember most doctors, including Hippocrates and Ben Franklin agree holding one in for extended periods of time is not healthful. In fact, some even believe that there may be dangerous side effects (including dizziness and headaches). Your colon could become bloated, and theoretically, the methane and other lethal gases could add enough toxins to your blood to poison you.

Until next we meet, “I fart in your general direction.”

Posted by Unknown at 1:26 PM No comments: