“Please pass the catsup.” A simple request for sure and yet it was a request that sparked an evening of controversy. There we were enjoying a fine evening of food, drink and conversation at our favorite watering hole when our very good friend, a friend we often call Webster because of her extensive vocabulary and nearly flawless command of the English language, asks for catsup (putting the emphasis squarely on the cats). Immediately, everyone at the table corrected her with a resounding, “it’s Ketchup!”  A debate older than time itself ensued. What is the proper name and pronunciation of the spicy tomato condiment sometimes spelled ketchup, catsup, catchup or cetchup?

Normally in this situation Webster (as I’ll call her in this article) would have run straight to the bookshelves grabbed the OED and within a few minutes we would have been regaled with the origin, definition and derivation of the word ketchup.

Subsequent to our dinner, I did look up the word in no less than three dictionaries. Apparently, the word ketchup is derived from the Chinese ke-tsiap, a pickled fish sauce, more like soy sauce or Worcestershire sauce than the tomato based condiment we know so well. This fish sauce eventually made its way to Malaysia and Indonesia where it became kechap and ketjap respectively. By 1690 the word “catchup”appeared in print in reference to this sauce, and in 1711 “ketchup” appeared. Today, catsup (pronounced according to the American Heritage Dictionary, “catch up”) and catchup are acceptable spellings used interchangeably with ketchup, but ketchup is the way you will find it listed in the majority of cookbooks and on most commercially available bottles.

So, what? Who cares, you ask? While all the variations are widely accepted and tend to be regionally specific, ketchup producers in the 1980s found out just how important the name “ketchup” is. In 1981, the Reagan administration decided to count “ketchup” as a vegetable on school lunch menus. All commercial bottlers who labeled the condiment “catsup” found themselves producing a simple condiment rather than a tasty and governmentally sanctioned vegetable. While public outcry eventually forced a reversal of this policy most ketchup producers had already changed their labeling and today it’s very difficult to find a bottle from any manufacturer labeled anything other than “ketchup.”

Regardless o the spelling or pronunciation, ketchup has a long and storied past that surprisingly until very recently did not include tomatoes.  In the 1600s Dutch and British seamen traveling to China, Malaysia and Indonesia developed a taste for the pickled fish sauces from this area. Many of these sailors stowed small crocks of the salty condiment in their personal effects and imported it into their home countries. In an attempt to recreate the Asian condiment, cooks throughout Europe began to develop their own recipes.  Many regional variations emerged from these experiments. The British, who were particularly fond of the condiment, created their own ketchups that featured brined and vinegared mushrooms (the favorite), anchovies, oysters, cucumbers and walnuts. 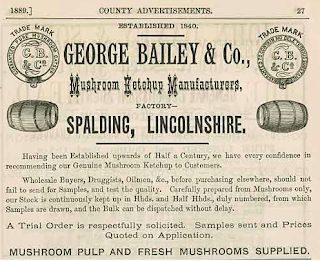 The first printed ketchup recipes appeared first in British cookbooks and then in their North American counterparts. Elizabeth Smith's, 1771 “The Compleat Housewife”, featured a “catchep” recipe that called for anchovies, shallots, vinegar, white wine, cloves, ginger, mace, nutmeg, pepper, and lemon peel. A post-Revolution version of the first American cookbook featured the same recipe, but called for cider vinegar rather than plain. Eighty-five years later the first tomato ketchup recipe was published in Nova Scotia by American ex-pat James Mease. Mease’s recipe, which he called “love apple” ketchup was said by him to have come from France, a fact that would have lent more respect to the recipe, but there is no proof of it.

Inventive cooks continued to experiment with ketchup recipes throughout the late 18th and early 19th century when they became commercially available. Commercial ketchups in Britain continued to feature mushrooms, but consumers in the U.S. preferred tomatoes. Ketchup was sold nationwide in the US by 1837 thanks to the hard work of Jonas Yerkes, who sold the product in quart and pint bottles. He used the refuse of tomato canning-skins, cores, green tomatoes, and lots of sugar and vinegar. Lots of other small companies followed suit-by 1900 there were 100 manufacturers of ketchup. The big success came in 1872 when HJ Heinz added ketchup to his line of pickled products and introduced it at the Philadelphia fair. The Heinz formula has not changed since, and has become the standard by which other ketchups are rated.

In 1848 some unscrupulous ketchup manufacturers were reported  for their unsanitary practices-coal tar and pigs blood were frequently used in the manufacturing process to heighten the red color. Others made the condiment from concentrated tomato pulp in the off-season, which, according to reports, they stored in very questionable circumstances. This debate continued until the 1900s, when the Pure Food Act put strict limits on food manufacturers. Today, the FDA has very strict guidelines that define ketchup, specifying the spices that must be used, as well as the thickness of the end product. 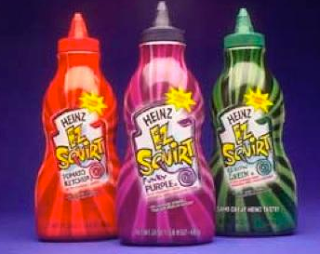 Today ketchup is one of the most popular condiments in America. According to the Ketchup Advisory Board, 98% of the American population has at least one bottle in their refrigerator, former President Nixon liked it on cottage cheese (A sure sign that something was not quite right with him), Baskin Robins has experimented with ketchup flavored ice cream and most recently Heinz has introduced ketchup in four custom colors including “Funky Purple, Passion Pink, Awesome Orange and Totally Teal.” While kids might be attracted to green or purple ketchup I find these special ketchups an insult to both nature and the tomato.

The most lasting tribute to this great condiment is not actually ketchup it is the “World Largest Catsup Bottle,” which fills the skyline of Collinsville, Illinois (www.catsupbottle.com). In 1949 the town’s watertower was recreated in the shape of a 170 foot catsup bottle. Since then millions have flocked to the town to see it.

But if you really want to pay tribute to this tasty condiment you’ll make it yourself. In fact, its quite simple to make your own ketchup:
Ingredients:
28 oz can of tomatoes or two pounds fresh
1 cup of onion diced
1/2 cup cider vinegar
1/2 cup honey
1/4 teaspoon each of dried mustard, ginger, cayenne pepper, celery seed, cinnamon, allspice, and ground cloves.

Run the tomatoes through a food mill or food processor into a large non-reactive pot, add the other ingredients as well as salt and pepper to taste and cook until thickened (about an hour).

Or you can be as creative as you like. Try replacing the tomatoes with mangoes, mushrooms or cucumbers. Hey I’ve even seen banana ketchup recipes. Most of all have fun it is just ketchup after all.

Equally tasty is tomato jam a slightly fancier and sweeter version of ketchup that’s great with cream cheese and bagels or as a condiment on grilled sausage sandwiches or your favorite burger. Here’s a version I made recently with the abundance of cherry tomatoes from our garden.
Ingredients:
3 pounds cherry tomatoes 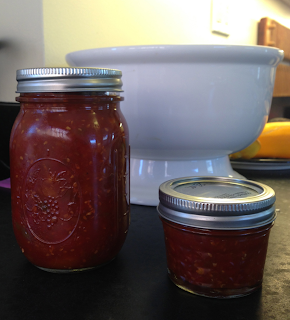 Combine all ingredients (except lemon juice) into a heavy sauce pan bring to a slow boil, reduce to simmer and simmer for about 2.5 hours or until liquid is nearly all evaporated and mixture has jam consistency. I put mine into 8oz wide mouth jars and boiling water processed the jars for long term storage
Posted by Unknown at 4:02 PM