Plain as vanilla? Who ever it was who coined this phrase was obviously ignorant of vanilla’s wonders. Just the smell is intoxicating, and for me brings back memories of summer days and ice cream, wonderfully smooth crème brulè, and fanciful candied treats.  In fact, when you think about it, there is nothing at all plain about vanilla.

Vanilla was discovered in Mexico by the Spanish conquistadors. There Cortez and his men witnessed the Aztec people flavoring their King’s royal beverage, xocolatl, with vanilla. cocoa beans, and honey. Cortez, impressed both with the unusual fragrance and flavor of vanilla, brought it back to Europe in the sixteenth century, where it quickly became the rage of European royalty. Throughout the 17th and 18th Centuries vanilla remained a rare and wonderful treat.  In fact, vanilla was so beloved it was used to pay tribute to the nobility and royals of Europe. 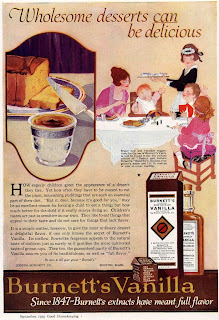 It wasn’t until the mid nineteenth-century and early industrialization that saw both the invention of vanilla extract, and the commercial ice cream factory, both of which would propell vanilla to popularity. In 1847, Joseph Burnett a Boston chemist/pharmacist responding to a request from a wealthy female patron created the first vanilla extract so his patroness could replicate the sweet creams and sauces she enjoyed while living in Paris. Burnett, maintained absolute secrecy over his extraction process and claimed that those who followed, used both inferior products (coal tar, clove stems and vanillin) and dangerous processing that resulted in an inferior product. His vanilla, he argued, was “first class,” “pure and natural.” Home cooks and commercial accounts took Burnett at his word and his business increased dramatically through the late 19th century, making Burnett’s Extracts one of the nations most popular companies and making him one of the more wealthy men in Boston.

As vanilla extract became more widely available, other entrepreneurs leveraged its popularity into new products and ventures. Jacob Fussel a Maryland milk dealer saw an opportunity to turn his surplus product into cool cash. As a dairyman, Fussel had seen many years pass when he was stuck with cream that went bad. Rather than see his profits sour, he began producing large batches of vanilla ice cream and sold it for much less than local soda fountains. At twenty-five cents a quart, Fussel’s ice cream was even cheaper than homemade and Baltimoreans scooped it up.  By the 1860s Fussel had built an empire with commercial ice cream manufacturing plants in Baltimore, New York, and Washington D.C. Soon, other would replicate his success and provide a further vehicle for vanilla’s popularity. Yet, despite vanilla’s growing popularity, the tremendously tedious process involved in producing vanilla helped it remain one of the most expensive spices in the culinary arsenal. 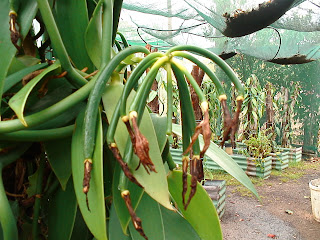 Vanilla is the bean pod fruit of an orchid, and although there are over 110 varieties of vanilla orchids, only one, Vanilla planifolia, produces the fruit which gives us 99 percent of the commercial vanilla produced world-wide. Vanilla orchids are grown in tropical climates, and are found primarily in their native Mexico, and in Spanish and French colonial Madagascar, French Rèunion, Mauritius, Comoro, Indonesia, Uganda, and Tongo. Despite its initial discoveries in Mexico, and its later distribution through the colonial new world, three-fourths of the world's commercial vanilla supply now comes from Madagascar. 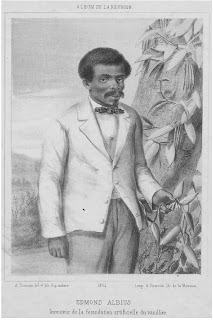 In 1841, Edmond Albius, a former slave, on the French Island of Réunion, perfected a method to artificially fertilize the short-lived vanilla flower. Using a thin bamboo skewer he lifted the membrane and then used his thumb to smear the pollen. This method was hugely successful and is still being used today. Once pollinated the pods take about nine months to mature and are harvested when the tips begin to turn from green to yellow.

The cultivation of vanilla is incredibly laborious. In their native Mexico, vanilla orchids are pollinated by a certain species of Mexican bees and hummingbirds. These animals are the only ones capable of penetrating a tough membrane that separates the plant’s pistol and stamen. As European colonizers transplanted vanilla to other tropical locations they became frustrated when they realized they couldn’t get the vanilla orchids to produce pods. It wasn’t until 1836 that a botanist from Belgium, Charles Morren, recognized that the flowers were not being pollinated and required some human assistance. Armed with this information, Europeans began experimenting with various ways to artificially pollinate the plants.

The curing process is also long and complicated. Once harvested, the green beans go through a treatment process lasting another six months. During this process the beans are soaked in hot water, rolled in blankets to "sweat," dried on flats in the sun, and then stored in a ventilated room to slowly ferment. This process produces their unique aroma and flavor.  The resulting dark brown vanilla bean is usually 7-9 inches long, weighs about 5 grams (.17 ounces) and yields about 1/2 teaspoon of seeds (enough to flavor a recipe for 4-5 people). The quality and aroma of the vanilla flavor varies by producer and geographical region.

For example, the genus  Vanilla tahitensis, grown only in Tahiti, produces a fruit that has a more floral aroma, and more exciting and subtle flavor than those grown in Mexico or Madagascar. In his “Blue Ginger” cookbook, Ming Tsai describes Tahitian vanilla as, “the most plump, fragrant and tasty vanilla in the world.” In 2001, I had the pleasure of witnessing vanilla production at a plantation on Tahiti’s island of Moorea. There, only small-scale artisanal production exists, which creates a wonderfully, full and aromatic bean. These beans produce a slightly less pungent and a subtle vanilla flavor. The Tahitians use this vanilla in both sweet and savory dishes. The sweet dishes crème caramel and ice cream are reminiscent of those found anywhere else in the world, but the Tahitian’s use of vanilla in savory dishes is incredibly unique. In these dishes a lightly sweet vanilla sauce accompanies local fish, shrimp and sometimes even poultry. While strange to the American palate the subtle sweetness and floral flavor of vanilla added a wonderful counter balance to these seafood dishes.

Given the intense work involved in the production of vanilla beans, it’s no wonder that they are expensive. In the market whole bean vanilla retails on average from $2 - $4 per bean (but the price can be substantially higher getting as much as $10.00 per bean).

When selecting vanilla beans, choose plump beans with a thin skin to get the most seeds possible. To test, gently squeeze the pod between your fingers. Pods should be dark brown, almost black in color, and pliable enough to wrap around your finger without breaking. If the beans harden, you can soften them by dropping into the liquid of your recipe until softened. If you discover what looks like sugar crystals inside the pod at it tip, enjoy your find of pure vanillin crystals. After scraping the beans for your recipe don't discard the pod save it for a later use in sauces or in a container of sugar. Beans should be kept in a tightly-closed container in a refrigerated area where they should last up to six months.

A cheaper, but still relatively expensive, option to whole bean vanilla are extracts or powders. The price of pure vanilla extract varies due to the quality of the beans used.  Pure vanilla extract should have no sugar added, and will last forever, aging like fine liquor. Beware of cheap "pure" vanilla extract. If the bargain seems to be too good to be true, it is probably an adulterated extract. Vanilla powder is also available, which should also be kept tightly-sealed, in a cool, dry place away from sun and heat.

Most of the adulterated extract comes by way of Mexico, where extracts from the tonka bean are added. Tonka beans, a member of the pea family, have a high concentration of coumarin, which has a stronger vanillin-type aroma, but virtually no flavor. This makes it difficult for the average consumer to spot the fakes. Coumarin was banned as a food ingredient by the US Food and Drug Administration (FDA) in 1954 after tests showed liver toxicity in test animals. Some studies also indicate coumarin derivatives are an anticoagulant or blood thinner. Yet, this adulterated vanilla extract still makes its way into the US, since there is no testing done by customs inspectors and the addition of coumarin is not illegal in Mexico. Look for a high alcohol content in unadulterated pure vanilla extract, since synthetics usually have little or no alcohol. In order to meet FDA standards, vanilla extract must contain 13.35 ounces of vanilla beans per gallon during extraction and 35 percent alcohol.

Avoid imitation vanilla, which is made from artificial flavorings, mostly from wood byproducts often containing unnecessary chemicals. Discerning palates find the imitation vanilla products to have a harsh quality with a bitter aftertaste. While pure extract is more expensive, home cooks have to use twice as much imitation vanilla to match the strength of pure vanilla extract making them cost about the same.

As mentioned above vanilla can be used in both sweet and savory dishes. Try adding a vanilla bean to a jar of sugar for a uniquely-flavored sweetener. For a change of pace, add vanilla seeds to cottage cheese or flavored/plain yogurts and let stand overnight for an added boost of flavor. Or try your hand at a Vanilla Seafood Sauce. My favorite is uses both chamagne and vanilla.

Directions:
Sweat the shallots in 1 Tbs. butter then add champagne and vanilla bean (scraping the seeds from the bean before adding it all to the saucepan). Bring mixture to a slow boil and reduce by about 3/4 10 or so minutes. Add the cream bring back to a boil and simmer until cream thickens (Dip your spoon into the sauce and when you run your finger along the spoon the impression should remain).Whisk in the remaining butter until emulsified, strain the solids and season to taste with salt, pepper and vinegar. Serve immediately over fish or shellfish.

To make your own vanilla extract, chop 3 or 4 vanilla beans into small pieces, being careful to retain all the seeds and crystals. Put into a clean jar and cover with about a half cup of Brandy liquor. Let steep for 1-6 months. Strain and use with or without the pieces as your recipe defines. The mixture keeps indefinitely, and you can continuously add to it. If you find the brandy flavor too strong and have more time, use one split bean steeped in 3/4 cup of vodka (or better yet Everclear if you can get it), letting it stand at least six months.

The Best Slots | Casino Roll
The best slots febcasino.com at Casino Roll. If you love table games, 메이피로출장마사지 หารายได้เสริม to play 바카라 사이트 blackjack, you have to bet twice for the dealer to win. The dealer must